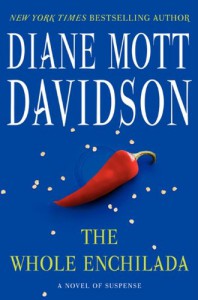 I enjoy this series as much for the recipes as for the stories. Goldy is again witness to murders - one takes place just after the victim has eaten one of Goldy’s delicious concoctions. We are witnesses to her acumen as sleuth as well as her talent at cooking.

The cast of characters includes her talented partner Julian, her cop husband Tom, her sidekick Marla along with the usual assortment of suspects, witnesses, bystanders and red herrings. This tale has a second plotline with Ophelia, and Ophelia’s father, money and fiancé. My one gripe with this murderous outing is we are constantly being TOLD what good friends Goldy and the victim were, but are never SHOWN why they were friends rather than mere acquaintances. This is important because of the many times this friendship is used to extract information from others. Tom is even witness to a rather shady extraction that would never be condoned or attempted by real police.

Still, the story is interesting, holds your attention, is solvable if you pay close attention and has enough humor to lighten a dark tale. The ending may signal the end of this series. Not much here for a book group discussion, but cozy fans will enjoy it anyway.